One woman's story about her journey with COVID-19 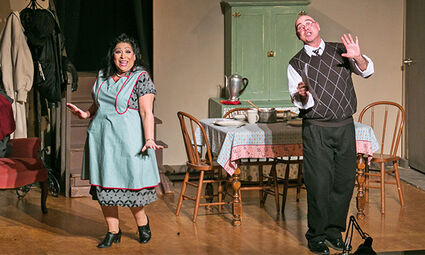 Elizabeth Jagelski in the role of Mother at the Liberty Theater production of Christmas Story. The role of Old Man was played by a type-cast Mike Ferrians.

DAYTON-Elizabeth Jagelski is known for being a vivacious, musically gifted person with a kind heart. She has contributed her directorial expertise to six of the Touchet Valley Art Council (TVAC) theater productions and her acting skills 13 times. She is also a devoted music teacher at Berney Elementary in Walla Walla.

To say she has not been herself lately would be putting it mildly. She, her 72-year-old husband, Tom, and her 89-year-old father, Juan Arebalos, have all been infected with, treated for, and survived COVID-19.

The week before Thanksgiving, Tom had some business to do in Walla Walla. Jagelski said he wore his mask inside and used the sanitizer provided to customers. Even so, five days later, he was experiencing "excruciating" back pain and felt "awful," going to bed earlier than usual that evening.

The following day, he went to the Columbia County Family Clinic in Dayton, where he tested positive for COVID-19. He was prescribed cough medication and sent home to quarantine.

Five days later, Jagelski took her father from the upstairs living room to the bathroom downstairs when his legs gave out. He has been cared for in the family home since suffering a stroke in 2019.

"We were able to get him to bed that evening," she said. "The next day, we took him to the hospital to be checked. We knew it was either COVID-19 or maybe another stroke. We weren't sure, but there was a drastic physical change."

He was diagnosed with COVID-19 at Dayton General Hospital, admitted, placed on oxygen, and treated with dexamethasone, hydroxychloroquine, and a blood thinner.

Jagelski said she was working in her classroom at Berney Elementary at the end of the first week in December when a feeling of fatigue and "brain fog" washed over her.

"It was the weirdest mental sensation," she said. "Brain fog feels like you aren't sure if you are awake, imagining, or dreaming. You can't concentrate."

Her husband was out of quarantine and with her when this happened, and he had to drive them home. When they got home, she said she walked down the driveway to get the mail but couldn't catch her breath.

"I kept stopping while bending over and trying to get some air," she said. "The only experience I have had like this was when I was little and swimming. I would hold my breath underwater too long and would come up gasping for air."

She said she went to bed feeling "awful."The next morning, she went to the emergency room at Dayton General Hospital, where she tested positive for COVID-19 and was diagnosed with pneumonia.

She needed to be hospitalized.

"I wanted to be close to my father, but the doctor there told me there was no room for me in Dayton."

Instead, she was transferred by ambulance to the COVID-19 care unit at Providence St. Mary's Hospital in Walla Walla. Her husband saw her off at the hospital with a small overnight bag of personal items.

"I wanted to cry, but not make him worry," she said.

In her room on the fourth floor, nursing staff, garbed in full protective gear, began the process of monitoring her vital signs.

She said, "The mask, gown, and air hose connected to a pack attached to their backs looked just like something out of a science fiction movie."

Like her father, Jagelski was placed on oxygen and treated with dexamethasone, hydroxychloroquine, and a blood thinner.

She doesn't remember the first eight to twelve hours in the hospital.

"I just remember waking up, throat and chest hurting and feeling my body working hard to breathe," she said.

"This isn't good for all three of us. The odds are against us."

The worries began: Will I walk out of the hospital? What happens if I don't? Will my father survive? Who will take care of him if I don't live? What if my husband has a relapse? What if I never see my loved ones again? Who will tell my students?

"In the hospital, you are alone."

She said it was terrifying when she realized the comfort she might have had from family and friends visiting her was not going to happen, and if not for the kind attention from the hospital staff, she would have felt completely alone.

"The staff made me feel like I was their only patient."

Could this have been prevented?

When the COVID-19 pandemic first began, Jagelski said the three began staying at home. They canceled vacations and trips to see family, and became more vigilant as the numbers of positive cases rose.

"We became more guarded, cleaning surfaces, washing our hands, wearing our masks, and avoiding groups. We have stayed home, and we only went out for groceries, or on a drive to change our scenery," she said. "When we shop, I always wipe down the wheels of my father's wheelchairs, wheel him away from people, who don't give us six-feet of space, and we disinfect our hands, door handles, and anything that could be cleaned."

Why did they survive when so many others have not?

One doctor told her their survival could be because they had been eating well, working to lose weight and because none of them have hypertension or diabetes.

"We can't prove it, but it is something to think about," she said.

Also, the support she received from fellow music teachers; Denise Hurst, Lori Parnicky, Stefanie Flerchinger, and Marybeth Norby, who did her school lesson plans, along with the well wishes and prayers from the staff at Berney Elementary, and from family and friends, kept her spirits up.

Plus, she simply made up her mind not to die.

"I have too many people that are counting on me," she said.

How are they feeling now?

The three of them are back at home but are experiencing bouts of exhaustion, requiring frequent periods of rest and more sleep. Her father is having difficulty regaining his strength, and her husband just "looks tired," she said.

Jagelski said the family is looking forward to the future.

This year Elizabeth and Tom will celebrate their 25th wedding anniversary, Juan's 90th birthday, and daughter Meagan's 40th birthday. Jagelski said she is grateful they are still here to enjoy their children and their grandchildren.

And we will get to see Elizabeth in another TVAC production, sometime in the future.