Each sport requires a county positivity rate of less than 5% 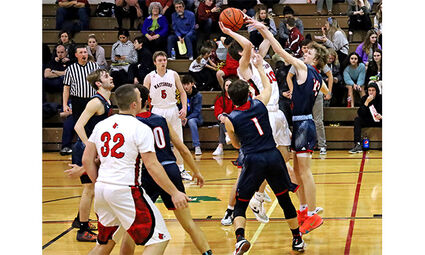 A Waitsburg athlete making a shot at a basketball game against Liberty Christian last February. Student athletes and parents are hoping there will be a spring sports season this year. Officials at WIAA are hopeful for an early-February start date for basketball and wrestling. However, much depends on how well our communities have done in keepng the spread of COVID-19 below a 5% positivity rate.

WAITSBURG-Many students are eagerly anticipating the start of the new sports seasons after traditional fall and winter sport schedules were cleared to keep athletes safe.

At this time, Washington Interscholastic Athletics Association (WIAA) has labeled sports as 'high,' 'moderate' or 'low' transmission sports, based on contact players have during training and game play. For example, Golf is a 'low' risk sport, while basketball is considered a 'high' risk sport. WIAA uses individual county COVID-19 case counts to determine transmission risk.

It is still unclear exactly when high school athletic competitions will resume, but officials are hopeful for a February 2021 start for girls and boys basketball and wrestling. As a high-risk sport, basketball is on hold until Walla Walla County reaches the status of "Low Risk of Transmission" by the WIAA.

Low-risk transmission is achieved when the county reaches less than 25 COVID-19 cases per 100,000 residents for at least 14 days and a less than 5% positivity rate. As of Monday, the county's positivity rate was unavailable due to delayed and incomplete data at the state level. A minimum of five practices would be required to play, half of the practices needed in a 'normal' year.

Guidelines to restart basketball at area schools are based on recommendations from the National Federation of State High Schools Association (NFHS), WIAA rules and regulations, and the Sports Medicine Advisory Committee (SMAC. Only athletes and officials would be allowed to handle basketballs, sanitized backup balls should be available, and a designated person to sanitize the balls. Basketballs should be switched out whenever possible. Players and officials will be required to use hand sanitizer before entering and exiting the court during substitutions. Only athletes and officials on the roster may be in the team's bench area. No hand touching will be allowed while switching players. Artificial noisemakers, such as air horns or timer systems, should be used in place of traditional whistles. Halftime performances will not be allowed.

Wrestling has also been identified by the WIAA as a 'high risk' sport and requires the same transmission rate criteria as basketball to play. A minimum of six practices would be required to compete. Onsite coaching would be allowed to resume without any physical distancing between coach and athlete. Coaches are being asked to gradually build back up to full training loads and may have to modify practices for various levels of conditioning.

AWIAA Executive Board meeting was rescheduled for January 6 to discuss the current season schedules and plan for adjustments as necessary. While the Executive Board will provide a uniform schedule, it has granted WIAA leagues and districts the ability to schedule seasons that best fit their local communities.