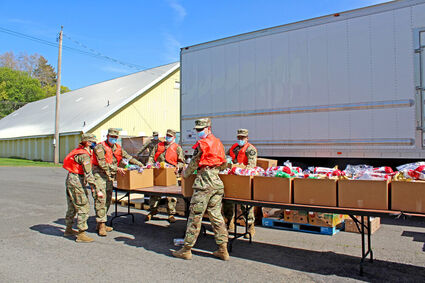 DAYTON-National Guardsmen from throughout eastern Washington were on hand at the Columbia County fairgrounds to distribute food to those struggling with food insecurity.

DAYTON-2020 has been a year like no other in Dayton's collective memory.

In February, the county experienced severe flooding on the North and South Touchet rivers and Patit Creek.

The flood, which caused $7.2 million in damage to county infrastructure, was followed close on its heels by the COVID-19 pandemic which sent health and safety personnel scrambling to prepare the county.

People were told to wear masks and limit social contact with others. Some did, and some did not.

Government offices were shuttered, and businesses closed their doors. Employees were sent home to face an uncertain future.

The schools sent students home with Google Chrome books for learning at a distance.

Unemployment and food insecurity became an issue. The Dayton Food Bank, which normally serves 40 families each week, began serving around 150 families during the summer months.

Initially, people were able to enjoy very limited outdoor activities. Still, smoke from the many wildfires burning throughout the West kept them inside from the end of August, well into October.

Tourism dollars fell off sharply because annual activities and events had to be canceled.

We are tired, but there is light at the end of the tunnel. We just need to wait a little longer.