By Bill Rodgers
The Times

The best thing to do to protect your iris for the winter? NOTHING!

Be patient for spring 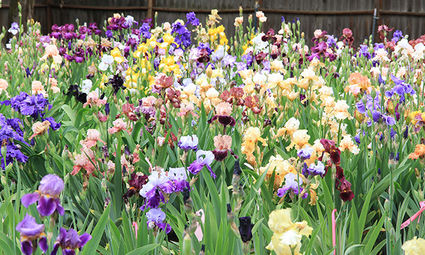 Several people have asked me about how I prepare my collection of 160 varieties of tall bearded iris for winter. Here is what I do: NOTHING! Iris are quite frost-hardy, so they do not need to be mulched. In fact, mulch is hard to remove, will retain too much moisture in the spring, and you will risk the new growth and root rotting.

I wait until early spring to remove the previous season's leaves, for several reasons. This has been my procedure for about 15 years, and it really seems to work in the relatively mild winter weather we have here in the Walla Walla Valley, and in the Puget Sound region, where I first started growing tall bearded iris.

As long as the leaves are green, they are still feeding the roots preparing for the next season's bloom, albeit not as vigorously as during the long hot days of summer. I allow the leaves to remain on the plants until early March. Sometimes they freeze during the winter, wilt, and then shrivel into paper-like tatters, making them very easy to remove in the spring. Besides, when dried out, I can place ten times the volume of leaves into a garbage bag then I can when they are still green. I then empty the garbage bag into my trash receptacle so that I can reuse the bag until it finally falls apart.

If the leaves do not die back (roughly fifty percent of winters), I use a hedge trimmer to mow them down before the new spring shoots get more than an inch or two high. You will want to keep an eye on the base of the clumps so that you can do this before the new leaves get too high for machine trimming.

However, you DO want to remove most of the old leaves in the spring to allow the coming season's leaves to grow unfettered and keep the clump base free from debris. Any old withered leaves left on the plants will act as mulch with the same result noted earlier­-rot.

Scissors work just fine for trimming if you do not have several hundred plants as I do. I used to wear a deep crater (which always began as a blister) into my thumb each year until I finally got wise to the hedge trimmer strategy. My thumb thanks me for finally using my head for something other than a hat rack!

It's okay to trim the leaves back in the fall if you want. It will not harm the iris as they are almost impossible to kill. I feel that leaving the leaves on until March helps build a stronger rhizome, which yields bigger, better, and more blossoms.

I also apply a granulated vegetable (not flower) fertilizer like 5-10-10 or 10-20-20 in early March to provide the potassium and phosphorous that iris (and most flowering plants) need to encourage vigorous blooming. [Aside: Just don't do this with Cosmos, as they need to think they are starving in order to flower. Before I learned this, my Cosmos would grow 8-feet high, have inch-thick stems, and never bloom.] Iris do need some nitrogen, but not a lot of it. If you give them too much, the literature suggests that they are more prone to rot. I have never had a rot problem by minimizing nitrogen supplementation. This strategy works well for other flowering plants as well, especially perennials, although you do not need to be as careful about nitrogen levels. Apply the fertilizer early so that these essential nutrients are available early during the most active part of a plant's growth cycle.