Before continuing his adventure, Willow Bill shared his art with students at Starbuck School District. 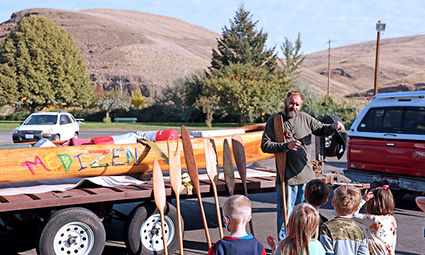 Master canoe builder Jim Jameson teaches students in Starbuck about different types of oars. Jameson and Willow Bill are heading to the ocean in New Medizen, the dugout canoe the two friends built together.

STARBUCK-If you see a traditional dugout canoe paddling down the Snake River over the next couple days, wave and say hi! Willow Bill is completing his second trek to the ocean, but not before stopping to share his love of willow branch art with students at Starbuck School.

Since 1998, Nevada resident William Gouldart, best known as Willow Bill, has taught kids how to build reindeer out of willow branches. In 2016, December 2-9 was declared Willow Reindeer Project Week in the state of Nevada. Over the years, Willow has taught more than 30,000 children to build reindeer with nothing more than a handful of willow branches and a few screws.

Last week, he added a couple dozen more children to the count. The stop in Starbuck wasn't by mistake- it was the adventurer's way of saying thank you to people in the community that helped him out during his first paddle down the Snake River earlier this summer.

"We sanitized everything in between each student," Willow said. He noted that the school took thorough measures to keep the students healthy and safe during the activity.

Willow was back in Starbuck on Monday, and this time he brought his dugout canoe, built by master canoe builder and good friend Jim Jameson. Jameson and Willow are paddling down the river with the goal of reaching the ocean near Astoria, Ore., for a second time.

Willow's stop on Monday offered an in-depth history lesson taught by Jameson, who carefully explained each piece of art on the canoe.

"That's the animal that came to us while we were carving the boat," said Jameson, explaining the beaver face that is carved into the stern. A butterfly with bright eyes emerges from hand-carved willow vines. "She has the eyes of She Who Watches. She Who Watches is the insignia of the Chinook Nation."

The willow vines that run along the sides of the boat represent Willow Bill. More than 360 leaves have been burned into the side of the canoe with hand-made branding irons. A medicine wheel is carved into the bow of the canoe.

"I made four different branding irons," Jameson said. "During our lunch breaks, we would work on adding the leaves."

Jameson also shared a variety of different oars with the students. He explained each oar's shape, purpose, type of wood and finish, and the unique stories about each oar.

"See how this one is forked?" Jameson asked a group of Starbuck youngsters, holding up one of the oars. "Women used to use these to pick water potatoes. They float when they're picked, so they would pop them off and then scoop them up."

A little over a year ago, Willow was diagnosed with stage four colon cancer and fought the biggest battle of his life. Part of the healing process, he said, was getting back in touch with Jameson to finish carving a canoe and complete the trip to the ocean.

"Knowing I was going to be needing some medicine, we decided to name it (the canoe) the New Medizen," Willow said. "I looked at my brother and said, 'man, if I live, I'm going to come back, and we are going to paddle this thing out to the ocean like we did fifteen years ago."

Jameson and Willow met when both men took part in the Lewis and Clark Bicentennial, crossing the country by  following the same path that the explorers did more than 200 years ago. It was at that time, the two formed an inseparable friendship based on their love of history and the land ever since.

It took the duo only thirty-one days to finish the dugout canoe, and it took fifty-four days to make it down the Snake River and out to the Pacific Ocean earlier this summer. It was Willow's way of celebrating his victory over cancer.

Willow and Jameson will be heading down the river starting on Wednesday, September 23. They will paddle the Snake River to where it meets the Columbia River, and then out to the Pacific Ocean. To read more about the Willow Reindeer Project, including how to purchase reindeer or other willow furniture, visit Willow Bill's website, www.willowbill.com.