Cases of Samoas are enough to make any volunteer smile 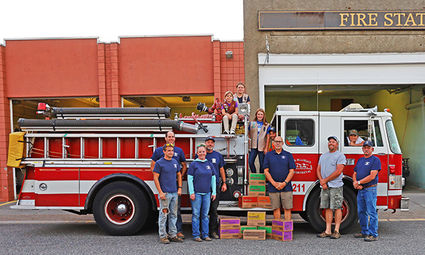 Girl Scouts Lilli Carpenter, Alyssa Hollingsworth, and Jessika Lambert dropped off twelve cases of coveted Girl Scout Cookies at the fire station last week. It was a sweet way to say 'thank you' to the first responders of the Columbia-Walla Walla County Fire District 2.

WAITSBURG-How do you make tired volunteer firefighters smile in the middle of one of the worst fire seasons on record? If you ask the local Girl Scouts, it is as easy as donating a few cases of cookies.

While donating leftover cookies is a normal thing, according to troop leaders Brandi Hollingsworth and Amber Lambert, the COVID-19 pandemic took an exceptional toll on cookie sales, leaving the Scouts with an abnormal amount of leftover treats. This year, there were 324 cases of cookies left at the end of the sale season.

The donation to the fire station in Waitsburg was the first of 24 stops from Walla Walla to Dayton. Typically, the unsold cookies are saved for locations that allow booth sales, but during the pandemic, on-site booth sales have been restricted across the nation. The Girls Scouts decided to give back to fire departments, emergency responders, and the few locations that allowed the girls to set up their booths before COVID-19 restrictions. Nursing homes and aging facilities were among the list of recipients, as well.

Girl Scout Troop 5384, Service Unit 492, which covers Walla Walla and Columbia Counties, was represented by troopers Jessika Lambert, Lilli Carpenter, and Alyssa Hollingsworth, who passed out cases of Samoas, Thin Mints, and Do-si-do's, to name a few. The firefighters and EMTs, outside the Waitsburg fire station, joked about who got what and saved the serious negotiations until the girls left.

"Thank you for all you do," said Girl Scout Alyssa Hollingsworth in a short speech. "We really appreciate it." The scouts and troop leaders shared some of their favorite ways to eat the cookies, like a Thin Mint milkshake, before heading out for the evening.