Reading suggestions to get started examining issues of race in America 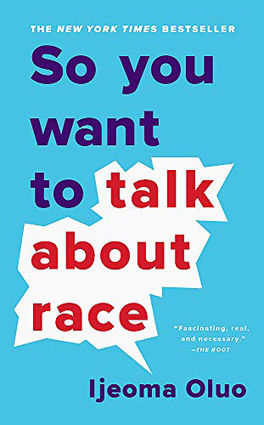 As America confronts the realities of racial inequity in our country, many people are looking towards books to help them examine these difficult issues. Goodreads website provides a handy list of some of their most popular titles in this genre. Find more at: https://www.goodreads.com/shelf/show/racial-equity

White Fragility: Why It's So Hard for White People to Talk About Racism - by Robin DiAngelo, published 2018

The New York Times best-selling book exploring the counterproductive reactions white people have when their assumptions about race are challenged, and how these reactions maintain racial inequality.

The New Jim Crow: Mass Incarceration in the Age of Colorblindness by Michelle Alexander, published 2010

"Jarvious Cotton's great-great-grandfather could not vote as a slave. His great-grandfather was beaten to death by the Klu Klux Klan for attempting to vote. His grandfather was prevented from voting by Klan intimidation; his father was barred by poll taxes and literacy tests. Today, Cotton cannot vote because he, like many black men in the United States, has been labeled a felon and is currently on parole."

Ibram X. Kendi's concept of antiracism reenergizes and reshapes the conversation about racial justice in America-but even more fundamentally, points us toward liberating new ways of thinking about ourselves and each other. In How to be an Antiracist, Kendi asks us to think about what an antiracist society might look like, and how we can play an active role in building it.

So You Want to Talk About Race - by Ijeoma Oluo, published 2018

In this breakout book, Ijeoma Oluo explores the complex reality of today's racial landscape--from white privilege and police brutality to systemic discrimination and the Black Lives Matter movement-offering straightforward clarity that readers need to contribute to the dismantling of the racial divide

Me and White Supremacy: Combat Racism, Change the World, and Become a Good Ancestor - by Layla F. Saad, published 2019

Me and White Supremacy teaches readers how to dismantle the privilege within themselves so that they can stop (often unconsciously) inflicting damage on people of colour, and in turn, help other white people do better, too.