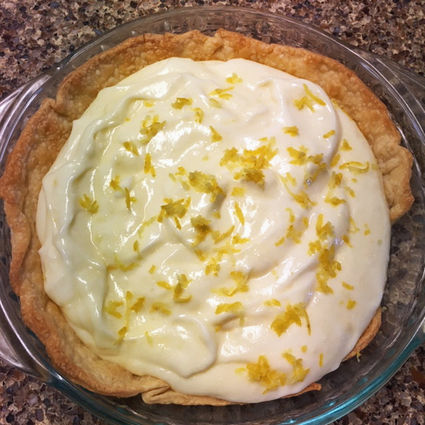 I saw this recipe and decided to make it for a couple of reasons. First, Joe likes anything lemon, and second, those readymade pie crusts come two in a box. I made last week's recipe with one of them so there was another one to use. I already had another cream cheese so all I needed to pick up was a lemon for zesting.

It goes together quickly and lemon cloud is a good description. It is light. The custard part cooks up quickly. The beaten egg whites make it fluffy, but to be honest, next time I think I'll fold in Cool Whip.

I had a little drama in the kitchen! To speed things up, I thought I'd throw the sugar in with the egg white and whip it together. I know-I should have known better, and no, it doesn't work. I whipped it on high until I realized I wasn't going to get those fluffy white peaks. It was a pretty white gooey mess that I had to throw away. So now I had to get two more eggs and throw the yolks away, get the sugar back out that I had put away, and start again. Sigh! Of course it worked this time with beating the whites, then adding the sugar.

Combine sugar, cornstarch, water, lemon peel (zest) and juice, and egg yolks in a saucepan. Beat well. Stir while cooking over medium heat until thick, it will thicken just as it starts to simmer.

In a small bowl, beat egg whites until stiff, add remaining ¼ c. sugar. Fold sweetened egg whites into lemon mixture. ** It does not say to wait until the lemon mixture cools down, but I can't see folding in egg white while it's warm.

Spoon filling into shell and chill.

I zested a little more lemon to add on top to make it pretty. I think it would even be good frozen, because it wouldn't take much to thaw it.