Lamberts stepping away from corn crop

Ed and Cathy Lambert are looking forward to focusing on family, hobbies 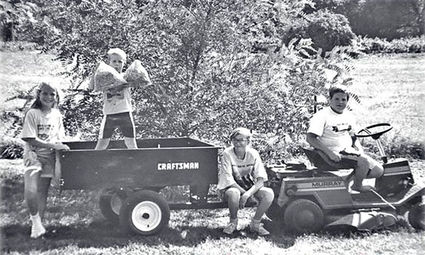 The start of the Lambert Corn stand, circa 1990. What started out with Kelly, Scott, Chad and Casey Lambert going door to door as kids, turned into one of Waitsburg's favorite summertime traditions.

WAITSBURG-Summer BBQ menus are going to be a little less sweet in Waitsburg this summer. After 30 years of growing a secret variety of sweet corn, Ed and Cathy Lambert are retiring to focus on family, Ed's lumber milling, and their own family garden.

"We started growing corn when we moved here in 1988," Cathy said. "Our kids would load up a wagon with fresh vegetables and walk around the neighborhood, selling the veggies to neighbors. Everyone loved it!"

Cathy said it didn't take long for local demand to outgrow the supply so they began planting bigger and bigger corn crops on their two-acre garden plot.

What started out as a door-to-door sales model turned into thousands of ears of corn, innumerable amounts of zucchini, tomatoes, cucumbers and other fresh vegetables being sold daily on their front lawn.

All of the vegetables were hand-picked each morning, according to Ed.

"We would get up at daybreak and pick anywhere from 1,000 to 1,500 ears of corn every morning," he said. "We usually had to go back and pick more before the day was over."

Ed said that the demand got so high they eventually had to sell corn from a flatbed trailer.

Each year, Ed and Cathy would order corn seeds from a secret source in New York.

"We just aren't ready to give up our secret yet," Cathy said while laughing. "Maybe someday."

Waitsburg residents weren't the only ones who looked forward to Lambert corn in the summer. It wasn't unheard of to meet people who had driven hours 'just for the corn.' Boxes of their sweet corn were shipped as far as Alaska some summers. Ed and Cathy said they have already had phone calls this summer about their corn.

Cathy said she is excited to focus on her personal garden this summer.

"I'm almost positive I'll end up with extras," she said. "If I do, I'll set them out front in a box and people are welcome to take what they need."

She also said they had a handful of volunteer gourd and squash plants, and she will place those out front of their Arnold Lane home when they are ready, like she has in years past.

Ed and Cathy aren't completely done growing corn. They have taken a small section of their corn plot and have planted corn to share with their family. Cathy said that they freeze a lot of the kernels so they can enjoy it throughout the year.

Stepping away from the large-scale corn garden frees up time for Cathy to spend with her grandchildren and for Ed to spend time woodworking and milling lumber. The Lambert's home is decorated with many of Ed's creations, including custom benches, tables and deck railings.

"It's just that time," Cathy said. "We've really enjoyed growing the corn and sharing it with our neighbors for all of those years."