By Gracie Compton
the Times 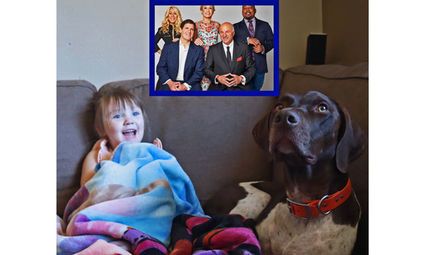 Shark Tank is always better when you watch with a pal. Even Goose knows when the sharks pass up a great idea! Inset: The sharks, Lori Geiner, Mark Cuban, Barbara Cocoran, Kevin O'Leary and Daymon John.

Mom made yet another quarantine mistake. Actually, Mom and Dad were both in on this one. It didn't involve shaving cream and the Roomba, but a TV show called "Shark Tank." Mom thought she was going to deter little me from the TV by watching a 'big kid' show, but boy was she wrong!

I'm hooked, everyone. "Shark Tank" is a show where entrepreneurs pitch an idea, an invention or a business to billionaires like Mark Cuban (Mark is one of my favorites). Sometimes, the presenters have a great plan and land a deal with a shark or several sharks. If the pitch isn't up to par, the sharks all pull out...