Skills and experience gained along with bonds of friendship 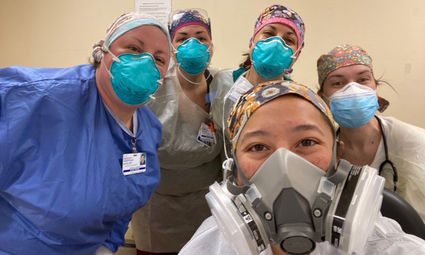 Jenna Watts (second from left) formed strong bonds of friendship with the people she met while working at Harlem Hospital.

Skills and experience gained along with bonds of friendship

WALLA WALLA-A Walla Walla native and WA-HI graduate, Jenna Watts was just finishing up a nine-week traveling nurse stint at Harlem Hospital in New York City when she and I spoke a week ago.

"New York has a special place in my heart, my dad lives here, and I spent all of my summer's here growing up," she said.

The coronavirus crisis and Governor Cuomo's appeals for doctors and nurses to help, resonated with her.

In early April, The New York Times reported that over 700 people were dying of the virus each day in New York City, with nearly 4,600 COVID-19 patients on ventilators. It became the world epicenter of the coronavirus outbreak.

A nurse at Providence St. Mary's Hospital since graduating from Walla Walla Community College with her R.N. degree in 2017, Watt's and the other St. Mary's staff were experiencing a significant drop in patients. Providence Director of Communications Kathleen Obenland noted a 50% decline in ER patients in April. (Times, May 7)

In addition to the decline in ER visits, Washington state restricted elective surgeries and non-urgent or life-threatening procedures, further reducing the workload of hospital staff.

"People stopped going to the hospital, they were scared. The nursing staff was left with little to do, said Watts.

"When I heard that NY was getting hit so hard I kind of started wondering if I should come over and help, even if just for a few weeks. I just felt like I could put my nursing skills to better use."

She was sitting on her couch at home when one of her nurse friends posted a link for a site that advertised the need for nurses in New York City.

"I clicked on the link, and it basically asked for two things, your name and a resume, and so I forwarded that and literally got a phone call 20 minutes later," remarked Watts.

This early-April conversation quickly led to an April 19th flight to New York and a start date of April 21 at the 272-bed, public teaching hospital affiliated with Columbia University.

Fortunately, her sister had just moved into the home Watts shares with her 12-year-old daughter Payton, and her sister volunteered to handle the mail and take care of her pets in her absence.

Payton accompanied Watts to New York and moved in with Watts' father who lives in Long Island, while there, Payton continued with her virtual sixth-grade coursework.

Staying in touch with Payton worked out well, too, "I've been fortunate, Harlem has very much treated us like family, and I get every weekend off, because they know that I get to see my daughter on the weekend. They don't make me work every weekend which is unheard of in nursing."

Watts was able to find housing nearby at a 'very nice' five-bedroom apartment she shared with six other travel nurses.

She arrived at Harlem Hospital on the tail end of the peak of the outbreak. "I got half a day of orientation, and then the next day we started taking patients." On her first day, every patient she cared for had COVID. It was her first time working with an intubated patient, which she described as a powerful experience.

Watts had nothing but good things to say about working as a team amongst so many people new to each other. "You bond with the people who came to help, like you did, they left their homes and their families and friends to come to somewhere where they are not familiar- to just work and do what we do as nurses, take care of people. Even the staff nurses treat us as if we are part of them."

As a single mom, she said she was definitely nervous about catching the coronavirus but noted that Harlem Hospital's PPE experience was excellent. Each day she wore a new gown, new head and shoe coverings, an N95 mask, a surgical mask, and a face shield. 'the whole nine yards.' "I feel like I'm more likely to catch it walking out and about in the streets than catching it at work."

Financially, the crisis-pay Watts is receiving for this work will mean a lot for this 32-year-old. She said she realized with this opportunity, "I could pay off a lot of things, my car, my student loans, my credit cards, and still have savings."

Traveling nurses work in short-term roles at hospitals where there are nursing shortages. Wages are typically higher than for staff nurses and can include paid housing, stipends, and other incentives. Right now, with COVID-19, travel nurses are in high demand, however, according to an industry website, Nurse.Org, nurses who take on these difficult assignments need to be prepared to enter a "war-zone". "I would say my nursing knowledge has increased tenfold in the short time I've been here. I had never worked with a vented patient, and I had never cared for a vented patient myself before working here." Due to these new skills and experiences, Watts is looking into emergency medicine as a career choice.

She also gained an admiration for the staff nurses of Harlem Hospital. "The staff nurses? They are the true heroes, they were here at the beginning when there wasn't any help and they were taking 8-10 patients themselves." They even encouraged her to join the staff of the hospital, returning the admiration.

Watts also took part in a few Black Lives Matter gatherings, attending with the other nurses from her apartment. "It was such a humbling, beautiful experience, honestly. Seeing so many different types of people come together for the same cause is such a beautiful thing."

Protestors and other citizens were wearing masks in New York City she said, and she hoped that Walla Wallan's take the virus very seriously.' "I saw a lot of people die, and that is something I hope that I never have to experience again."

Watts, with her daughter Payton, returned to her home in Walla Walla this week and has plans to enjoy the summer while looking for employment opportunities.