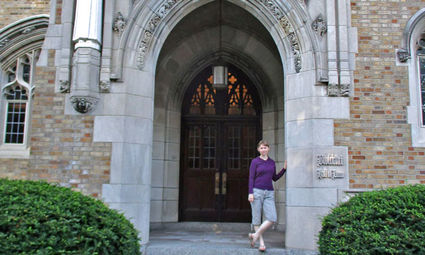 You know what sounds great right now? Some nice escapist literature. You know what I'm not in the mood to do right now? Think up a nice escapist plot. This, then, is the story of an intrepid adventurer (and also her mother) on a quest through the plague-stricken wastes of Middle America to retrieve the long-lost Treasure of Apartment 1-B in time to avoid the Curse of the Lost Security Deposit.

Our quest begins at an obscenely early hour as our two heroes race down the darkened highways of Southeastern Washington towards Pasco Airport.

"Not quite," corrected the adventurer's mother. "But it does seem to want to pass us – egads! A deer!"

A quick pump of the brakes brought our heroes' vehicle to a halt, but the car behind them took the opportunity to swerve around them and speed off, heedless of the possibility that there had been any logic behind the sudden stop. Luckily, the deer made its way across the road in time to avoid becoming venison.

"Here's hoping that's not the pilot," muttered the intrepid adventurer.

The remainder of the journey to the airport was uneventful. The two parked and donned paper masks, readying their supplies for the next task ahead of them: the Gauntlet of the Grumpy Gate Guardians.

"How very mysterious!" the intrepid adventurer's mother commented as they began to sacrifice their travel shampoos to the gaping Maw of the Scanner Doohickey. "The Grumpy Gate Guardians seem...glad to see us?"

"Just go on through the All-Seeing Vortex and perform the dance which is illustrated in the yellow hieroglyphics!" chirped one Guardian.

"They, like everyone else in these dark times, must be happy to interact with fellow humans," mumbled the intrepid adventurer.

Our heroes proceeded through the gauntlet without incident and gathered at the foot of the Pedestal of Gate Five, where the airline's chosen shaman announced that boarding would proceed from the rear seats to those in front, a stark change from the customary ritual, which involved those who had paid lower prices for tickets being the last to board and having to shove their way around five or six people before being able to sit down.

"Can it be," asked the intrepid adventurer's mother during takeoff, "that this horrible plague has caused the airlines to repent of their barbaric ways?"

"It is almost more than one could dare to hope," the intrepid adventurer murmured, "but given that it isn't safe to touch the in-flight magazine, it's not as though I have anything better to do than hope."

After a little less than an hour of hoping, our heroes touched down in Seattle. But to their horror, the once-bustling airport was all but dead, its coffee shops shuttered and its Muzak silent. Instead, its cavernous halls were filled with the cries of those fearsome beasts which lurk in airports the world over.

"Look, Mother!" exclaimed the intrepid adventurer. "Unruly toddlers whose parents can't be bothered to supervise them!"

"That's not our biggest problem, dear," she replied. "Look at how crowded it is!"

"Most airports are crowded, Mom," the adventurer noted.

"Yes, but look at all these people taking off their masks! We can't get six feet away from them!"

"Goodness gracious!" the explorer explained, observing the same phenomenon. "Don't they realize that the point of wearing a mask isn't for one's own protection, but to prevent oneself from infecting others when social distancing isn't possible?"

"What do we do?" her mother asked. "We can't lecture the whole airport on the importance of wearing masks – even if it were possible, it would be rude! And this layover is three hours long!"

"We'll have to use our wits," said the intrepid adventurer through gritted teeth. "Our quest must not fail!"