By Emma Philbrook
the Times 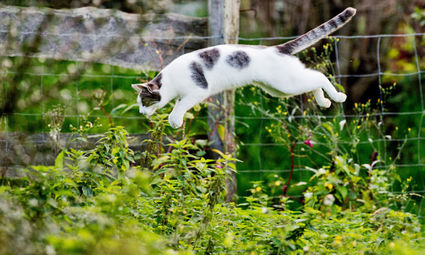 Keeping cats from using garden beds as a litterbox is imperative to growing food.

Last week's Times ran a couple articles about gardening. As offering unsolicited advice is one of my favorite pastimes-and as I'm sure you're not interested in another week's worth of secondhand finals stress-I figured I'd share a couple horticultural tips of my own. (As for my qualifications, I do have some green stuff coming up in this year's garden, and barely half of it's weeds!)

Yes, seeds are cheaper than plants. Yes, there's usually more variety in the seed-packet display than there is on the transplant cart. And yes, the prohibitions on shipping plants into the state don't apply to seeds. But tomatoes and peppers do not care about your petty human problems. With the possible exception of some cherry tomatoes, it is categorically too late in the growing season to start either of these from seed, and have any hope of a decent harvest window. (Don't worry-the seeds should still be viable next year, when you will [of course] be organized enough to start them indoors in late February or early March.)

Unless you intend to can or freeze your harvest, or you're planting a winter-hardy root crop that can stay in the ground until it's ready to eat, don't plant more at once than you'll eat at once. I like to plant a week's worth every Wednesday.

In a similar vein, don't plant too much of crops you don't usually eat. Radishes, for example, are super easy to grow and ripen quickly. They're nice in salads and give you something to show for your hard work during the tedious period between planting and full-swing harvest. But be honest: how often do you get radishes at the grocery store? Plant a few, see how much you use them, and adjust your plantings accordingly next year. Same goes for rutabagas, parsnips, kohlrabi, and other stuff you'd like to try growing but haven't really eaten before.

Peas, lettuce, and spinach grow best in cool weather. You might be able to get away with planting them in shady areas during the summer. As far as most other crops are concerned, though, the light requirements are not a suggestion.

Get a seed catalogue. Even if you've already ordered all your seeds or plan to buy them locally, the catalogue will have good growing tips and other useful information about harvesting, disease prevention, and how much of a yield you can expect.

Cucumbers are total drama queens and don't need much of an excuse to die. Your best bet is to plant seeds directly in the ground, water regularly, and pray. Also, keep them away from cantaloupes. Cantaloupes are a bad influence.

Make a point every day of going out to water and weed your garden. Find a way to incorporate it into your routine. (I, for example, do my garden chores in between sanitizing the doorknobs and sanitizing the light switches.)

If you're just starting out and/or are growing with kids, the following list of nearly invincible vegetables may be of interest: beans, beets, cherry tomatoes, loose-leaf lettuce, potatoes, radishes, snap peas, spinach, and summer squash (including zucchini). Even I have trouble killing these.

Cats are your enemies. Guard the giant litterbox that is your garden accordingly.