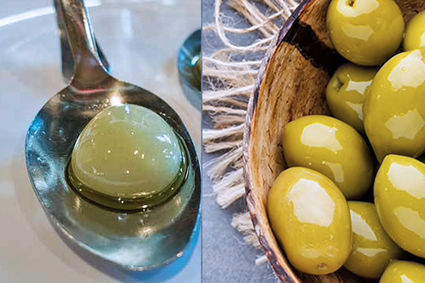 A modernist take on an olive vs. olives the old fashioned way. Both delicious!

We finally finished unpacking all of Daniel's books (all 30 boxes of them), and his totes full of kitchen equipment, including a vast amount and variety of spices and a treasure trove of chemicals. The majority of the bottles, packages and tools are foreign to me. He looked at me with his usual one eyebrow raised show of disdain as I rolled my eyes at the jars and packets we were moving into the pantry. But I admit, I'm becoming a believer. He has become extraordinarily accomplished in the molecular cuisine trend.

From my little bit of research, (Encyclopedia Britannica), modern day molecular cuisine evolved from molecular gastronomy, which actually was... "a scientific discipline concerned with the physical and chemical transformations that occur during cooking."

Eventually, chefs all over the world began to experiment, create and meld the science and their creativity devising new ways to cook and handle food. The competition was on, imagination on steroids to say the least.

One of the pioneers and more creative chefs, Grant Achatz, opened a restaurant in Chicago, called Alinea. Daniel and I went there about 15 years ago. The dishes were creative, the presentations both fascinating and entertaining, sometimes nearly jaw dropping; but libraries are noisier and I'm glad we had appetizers at a local pub first, because what it wasn't - was tummy filling.

Evidently, during the past 10 years while we were not together, Daniel became so accomplished with this culinary technique he was the expert and the only one capable of instructing this class at the culinary school where he taught. Hence, our pantry full of chemicals and tools which he ponders with his creative juices flowing. I am just happy that they are calorie free, because the gyms are closed, and I don't like running in this cold, wet weather.

The various chemicals when used, can suspend olive juice and make it look like an olive - while it bursts into your mouth in a flavorful blast. The use of "foams" goes in and out of style. They are sometimes overused, but sometimes they are the perfect light addition to a dish. However, the edible ink and paper dish created by Achatz has no appeal to me. Choose one: either make real food or write a letter, but unless I'm James Bond saving the world, I'm not eating paper. Right now, though, if the chemicals can turn my weeds into toilet paper, I'd celebrate Modernist cuisine.

I am a purist at heart, and a good fresh apple is perfect for me. When it starts to soften, I'm happy to turn it into applesauce. I don't need to have a chemical suspension of apples that aren't really apples, or to use the perfect mix of chemicals to turn those Fujis into a pear. Personally, I'd rather turn them into an apple pie.

Like all new trends, there are critics of Modernist style, stating "...that you don't need chemical gimmicks to make good food." Although I agree, I must admit it is fun to watch the transformation of vinegar into a vinegar veil, (a glossy sheet of cider vinegar) that lays on the bottom of a bowl of French onion soup, and provides an unexpected punch of taste.

Simply put, I love good food, not food that is chemically induced or altered. On the other hand, l admit I am impressed by the amazing dishes that Daniel and other chefs have created with the chemicals that enhance, suspend and transform a dish. I am grateful I live with someone who can turn a can of ordinary tuna into a scrumptious tuna melt, as well as turn vinegar into a glossy veil to be hidden inside a bowl of French onion soup. With food, as in life, variety really is the spice of life.