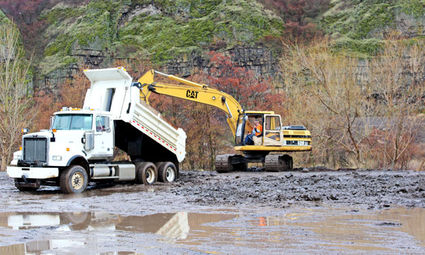 The Touchet River Levee foot path was closed due to flooding while county and city personnel worked to stabilize the levee by adding and shoring up the riprap.

DAYTON-The Board of Columbia County Commissioners called a special meeting last Thursday and passed an emergency resolution allowing money to be freed up to purchase materials to help mitigate a possible flood, after water in the North and South Touchet Rivers and Patit Creek began rising faster than usual, because of rapid snow melt caused by rain and warm temperatures.

At that meeting Emergency Management Department Director Ashley Strickland told the commissioners the U.S. Army Corps of Engineers determines flooding to be an emergency if there is an imminent threat to lives and property, with confirmation by the National Weather Service. At that time their criteria had not been met.

He was told by a National Weather Service hydrologist, that day, the Touchet River was expected to crest at 9 a.m. on Friday morning, and rain would change to snow and colder weather, which should slow the runoff.

By Friday morning at around 1 a.m., it became clear that people and property were in imminent danger from extensive flooding, and volunteers were called to the public works department to fill sandbags for use by the city and county crews.

Charles Eaton, the County Public Works Director, said Baileysburg Road was closed to traffic, and several people living along the road were essentially cut off. People living on the Wolf Fork and Whiskey Creek were cut off as well.

South Touchet Road was closed at Milepost 2 and the foundations of some homes were inundated with water.

The Eaton Bridge on South Patit Creek had water over the top of it.

He said there were concerns about high water on the levee from the rail bridge to the city's wastewater treatment plant, and crews were hard at work, adding some "height" to it.

There was flooding in Huntsville, as well. However, the county lacked the manpower to deal with it, at that point in time.

He said he was concerned about the snow that was expected later in the day, through Sunday. Crews were working as fast as possible to stabilize and provide temporary repairs ahead of the time they would need to run snowplows.

By noon the Washington State Department of Transportation had closed Hwy. 12 between Dayton and Waitsburg because of flooding over the roadway.

On Saturday, the highway continued to be closed from milepost 358 to 366, until midmorning.

Over the weekend, city and county crews were continuing to shore up the Touchet River levee from the rail bridge to the golf course, and to replace the rip rap by the city park.

On Sunday night the levee lost another hundred feet between the rail bridge and golf course.

There are continuing issues on Tucannon Road, Harting Grade, Wolf and Robinson Forks, higher up, will remain closed for the time being.

Personnel at the County Public Works Department said the flooding seemed to be following the same course as the disastrous flood of 1996, which destroyed or damaged 22 bridges and caused $30 million in damage.

Board of County Commissioners reconvene on Monday to discuss the damage

Columbia County isn't out of the woods yet.

Strickland said if the conditions are just right there could be another flood this year. There is still a lot of snow in the higher elevations.

The county is now in a transition stage from performing emergency remediation, to assessing the damage, and with fifty roads to inspect, and bridges to inspect, the process will be slow and long, he said.

State legislators have been in touch with County and City officials and are offering their assistance.

If the governor declares a disaster, and numbers meet the federal threshold, there could be federal aid, but there is no guarantee, said Eaton.

Eaton said he and FEMA would have to agree on the damage assessment before working through the process.

During the County Commissioners' special meeting, on Thursday of last week, there had been much discussion as to whether the county should be in the business of distributing sandbags to citizens, to protect their own property. The Public Works Department had been inundated with calls from people asking about the availability of sandbags. Only two pallets were stored at the Public Works Department.

Sheriff Joe Helm said it was his feeling sandbags should be reserved by the county for use in the event of landslides, infrastructure damage, damage to roads, and keeping in mind the potential need to evacuate people.

"I feel bad for property owners. If this does turn into a big flood how can people be evacuated if you don't have the materials?" he asked.

"If it gets much worse, then the two pallets become more valuable, if you didn't deplete them," Strickland said.

"We don't have a way to pay for it. If we do it this year then it will be expected next year," he added.

Charles Eaton who is the manager of the Flood Control Zone District (FCZD), reminded the commissioners about the "zero balance" in that budget.

In November 2019, Columbia County voters were asked to pass a permanent general access levy in the amount of ten cents per thousand of assessed value for the operation and maintenance of the FCZD, but the levy failed to pass.

Eaton said if voters had passed the measure, the money would have been used as seed money to go after grants, but to also provide sandbags for people to use in the event of a flood, like the one experienced last week.