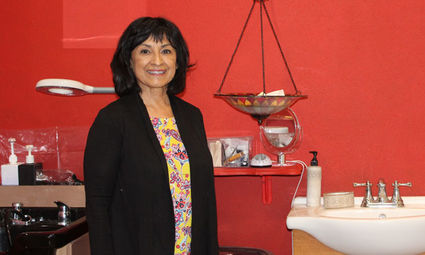 DAYTON—I suffered from a headache after hanging out in the office of the county commissioners for most of the day, last Tuesday, and I wasn't looking forward to doing another interview. But I had already scheduled one with Lorraine Ortega, the owner of a new spa in Dayton called Purple Sage Day Spa.

During our interview, Ortega was kind enough to offer me a complimentary waterless pedicure. How could I say no to that?

So, while I kicked back on a heated table and listened to the soothing strains of Spanish guitar, and the vocal genius of Sam Cook, I felt the stress of the day melt away under her soothing touch.

Didn't the hot stones and steam towels feel good? Does the bursitis in my left hip feel better after being targeted with the far infrared lamp Ortega uses to incorporate minerals deep into the muscles?

Some of you may remember Ortega from when she waited tables at Dorsey's Hotel, Restaurant and Lounge, in the early 70s, or when she attended Mr. Charles College of Beauty in Walla Walla, or as she began her career as a hair stylist in various Walla Walla salons.

Ortega has an impressive resumé.

She went into business on her own, in 1986, with the Hair Gallery in Walla Walla. Seven years later she operated and managed salons in Oregon, in Arizona, while working for Hilton Sedona Resort, and in Dayton, at the Day Escape Spa, in 2003.

Ortega said she is dedicating this spa to her parents, Mary and Robert Ortega, Jr.

"My mother would be proud of me," she said.

Ortega has always been interested in honing her skills. She told me she attended the International Beauty Conference for twenty-six years and received her certification as a Licensed Massage Therapist while working at the Sedona Hilton Resort.

She also became acquainted with waterless pedicures when the Hilton sent her and her co-workers to their first International Beauty Conference in Las Vegas.

Why waterless pedicures? Nail fungus thrives in moisture, she said.

She said they can be compared to replacing shingles on a roof. They come off better when dry rather than when wet.

"At the Hilton we used a Black and Decker sander," Ortega said with a laugh.

Ortega had been working at Christina Delp's Main Street Salon, in Dayton, until recently.

Because of the growing popularity of her Salt Glow full body exfoliation, and the lack of adequate space to do them there, she decided to open Purple Sage Day Spa.

The client lies on a heated table, wrapped in a wool blanket, for an hour and a half, while receiving a dry brush treatment of mineral salts with oils in them.

"It stays on the skin for five minutes and is removed with steamed towels, then creams are applied," she said.

The services at Purple Sage Day Spa are reasonably priced.

"My intention is to give high end services without the high end ticket price," Ortega said.

The Salt Glow treatment is $75. European facials take about an hour to do, and they start at $58.

Haircuts are $30 for women and $20 for men and come with a complementary eyebrow wax. Ortega allows an hour for haircuts.

"There's no rush. They're getting my full attention," she said.

Artificial gel nails aren't offered just yet but may be added to the list of services at a later time. For the time being, she said her main focus is on the spa.

Ortega said, "I'm here to give a one on one experience. It's very Zen. My intention is so the client feels very refreshed and relaxed when they leave."

And didn't I, though?