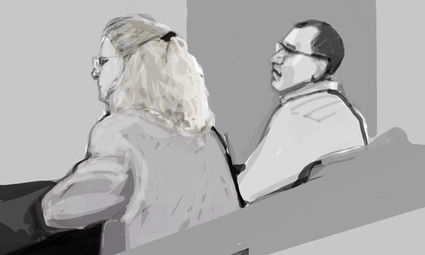 Defense Attorney Jane Richards and Defendant Benjamin Orozco from a sketch from the August 29, 2019 Times story.

DAYTON-Benjamin Orozco has been sentenced to a gross total of 447 months at a maximum-security prison for the second-degree murder of Lance Terry and the first-degree assault of David Eaton, in a shooting that took place in Columbia County, on July 7, 1996.

Each charge carries an additional sixty-month firearm enhancement, and these sentences will run consecutively for a total of 335 months.

Orozco also received twelve months for unlawful possession of a firearm in the second-degree, which will run concurrently with the other sentences.

Yet to be determined is whether the credit Orozco receives for time served will start from when he was arrested in Mexico, on a federal warrant, or when he was served by the state, upon arriving in the United States.

When she addressed the Court in last week's sentence hearing, Orozco's attorney Jane Richards said the tone of the Department of Corrections report was slanted and that Orozco did not receive a fair trial.

Orozco was found guilty after a four-day trial in August of last year.

She said Orozco told her one of the jurors appeared to be sleeping during the trial, one removed his hearing aids during closing arguments, and one juror winked when the verdicts were read.

Richards asked the Court to take into consideration Orozco's youth at the time of the shooting when handing down a sentence, which she hoped would be in the mid-range of the standard range for crimes of this nature.

Written statements from Orozco's family and friends in Mexico testifying to his good work ethic and dedication to his family were read by the defense co-counsel Rachel Cortez. Orozco has a wife and two children, ages 16 and 18, in Mexico.

Orozco addressed the Terry family, saying, "There's nothing I can do to compensate you for your loss, except to say I'm sorry."

"Saying sorry is not enough," said Lance Terry's stepmother, Norma, who spoke with her husband, Ed, by her side.

Norma Terry said Orozco demonstrated a profound lack of remorse during the trial.

She also wanted the court to know that she and her family are not racists, that Lance Terry's sister had a crush on David Delarosa, who was with Orozco at the time of the shooting. Also, Lance had two sisters, adopted from Korea, whom he adored.

One of the sisters, Bailee Walters, addressed Orozco from the witness stand saying, "we don't get to see (Lance) until our Lord calls us back home."

Norma Terry told Orozco, "Ed and I, with God's help, have found a way to forgive you. You are forgiven."

The Prosecution asked the court for sentences at the top end of the standard range, the high end was granted.

Slack said while Orozco was awaiting trial and sentencing, the county spent $75,880 on his medical care. Orozco has had multiple surgeries, an adverse reaction to antibiotics, and ongoing problems with his leg due to a bone infection, which contributed, in part, to the delay in bringing the case to trial.

Hon. Scott M. Wolfram, who presided over sentencing, denied a request from Slack asking for restitution from Orozco for the amount Columbia County spent on his medical care.

There will be an appeal, said Orozco's attorney, Jane Richards.

"He has always maintained self-defense and he still claims self-defense, today," she told the Court.

"That's just the way these things go... I'm confident that we all did our jobs right and that the trial was completely fair, so I'll be ready for the appeal," Slack said.

The 1996 shooting incident began when Terry and Eaton were driving in Dayton and were flagged down by Orozco and his friend David Delarosa. Words were exchanged. Terry was shot and taken to St. Mary's Hospital, in Walla Walla, where he died the next day. Eaton suffered gunshot wounds to his hand and knee.

Orozco fled to Mexico, but was taken into custody in San Francisco, Nayarit, Mexico on March 31, 2016, on a federal warrant. He was then extradited to the United States and was served by the State of Washington.

Orozco made his first court appearance in Columbia County Superior Court, on Dec. 21, 2016, and waived his right to a speedy trial in March of 2017.

He has been incarcerated at the Washington State Penitentiary in Walla Walla, while awaiting trial, and sentencing.