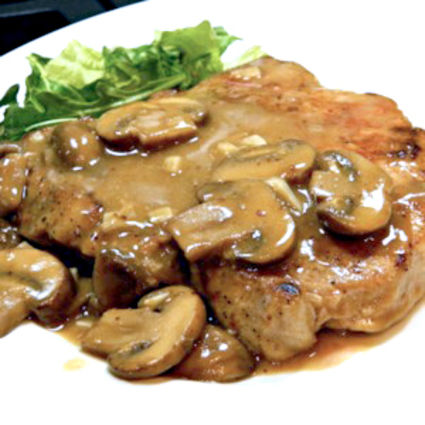 Remember I said I would do the Christmas Scones recipe this week, but call it New Year’s Scones? Well, I guess I’ll have to rename them again.

This recipe came to my email and it sounded good. I didn’t make it yet but I will. When it’s cold and dampish outside, a hot meal hits the spot, as well as fresh made soup.

If you don’t eat pork, I think a nice thick hamburger steak would substitute nicely. I will make mashed or baked potatoes to go with, but rice or noodles would also be good.

This week I came across a recipe for Kielbasa with Brussel Sprouts and onions. That was it, just those three ingredients, (and a tablespoon of oil) but it was very flavorful. I had a half apple not eaten so I cut it up and threw in also. I made mashed potatoes to go with it. It was yummy.

Season both sides of pork chops with paprika, salt, and pepper.

Heat a large skillet over medium high heat, add 2 tablespoons butter. Sear pork chops until golden brown and no longer pink in the center 2 to 4 minutes per side. Remove pork chops from the skillet and set aside.

Melt remaining butter in the same skillet over medium high heat. Add mushrooms and cook until golden and excess moisture evaporates, about 5 minutes. Add garlic and mustard, cook until garlic is fragrant, about 1 minute.

Add flour to the skillet, stirring to remove any lumps. Slowly add beef broth, whisking until incorporated. Season with salt and pepper. Reduce heat to medium and simmer, stirring often, until sauce thickens, about 5 minutes. Check for seasoning again.

Return pork chops to the skillet and cook until heated through, about one minute.

It was suggested to garnish with fresh parsley, chives or thyme leaves.

What I like about this, is it doesn’t use mushroom soup, just fresh ingredients. I think we (me) tend to overcook pork, making it tough so if this isn’t served at once, then keep warm at a low temperature—suggestion only.

HAPPY NEW YEAR to all. For us who survived Y2K, we smile as we remember the anxiety that all computers were going to crash, throwing the world into total chaos, no electricity, and heavens, no cell phones!!