Big year for a small town 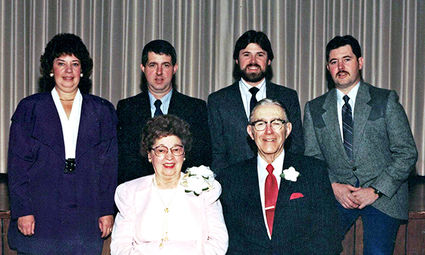 The Don Thomas family was honored at this year's Pioneer Fall Festival.

WAITSBURG-News making events for 2019 began very close to home, the Waitsburg Times', home, that is. The 141-year-old newspaper welcomed its first female owner when Lane Gwinn purchased the paper on January 1, becoming the paper's ninth publisher.

News in the valley took a turn for the tragic when Waitsburg resident Leslie Moreno was arrested in the stabbing death of her boyfriend Marcus J. Allesio. She is currently in jail and awaits trial for second-degree murder.

Also in January, Columbia Pulp announced its new plant in Lyon's Ferry expected to open in March, with plans to hire over 100 people. In September, news that the mill had cleared its last construction hurdle and was fully operational was a front page story.

Phoenix Pulp & Polymer, which licensed its cutting-edge process to Columbia Pulp, and was located in the Columbia Cutstock Building, was totally destroyed by fire on Jan. 29.

Another fire in June, at the Columbia Straw Supply stackyard on Lyons Ferry Road destroyed or damaged about a thousand tons of wheat straw. The straw was being stored in preparation for the launch of Columbia Pulp's mill. Despite these losses, the pulp industry resulted in an addition of an estimated 120 jobs and $10 million in payroll in Columbia County.

The owner-operated Whoopemup Hollow Café opened its doors in Waitsburg in 2005 with a menu that featured "a northwest take on foods of the American South." Sadly, the cafe announced that it was closing its doors for good on its Facebook page on February 15.

Main Street gained a new business when Ju's Traveling Pages, now known as Words N Print, first opened its doors on Main Street, finally settling in at the end of the street at 131 Main, offering gifts and books and custom screen-printing services.

Record water flows in the Touchet River in April claimed the barn and garage of Les and Laurie Richardson near the junction of Hogeye Road and Highway 12. The Richardsons reported they had spent close to $10,000 on rock and equipment which ultimately saved their home from flooding and erosion.

Supreme Court Judge Scott Gallina of Asotin County was formally charged with second-degree rape, fourth-degree assault with sexual motivation and indecent liberties in April. He plead not guilty to the charges in May and is currently on administrative leave, and free on bond. His trial has been set for March 9, 2020.

Waitsburg School District hired Mark Pickel as Superintendent in early May, replacing the outgoing Superintendent Dr. Jon Mishra, who accepted a position as the Director of Title I and Learning Assistance Program with Washington State's Office of Superintendent of Public Instruction. Pickel had been Assistant Superintendent at Garrison Middle School in Walla Walla.

Hiring difficulties temporarily set back the start of the outdoor swimming pool season as Waitsburg City employees struggled to staff the pool with qualified lifeguards. Residents were in the swim as of June 24, with shortened daytime hours Mon. - Fri., and evening hours offered on Mon., Wed. and Fri.

In August, a fire began in freshly cut wheat stubble, surrounding the Smith family homestead near Miller Road, and the residence of Jake and Angela Adams and their two small children. First to arrive to fight the fire was District 8 Fire Chief Bob Clendaniel, out of Dixie with a grass engine. Jake Adams credited the time he had spent over the last couple of years making a defensive space around his home, cutting out dead and dried poplars and overgrown dried grass as one of the reasons the home was saved. Responders from Fire Districts No. 2, 4, 7, and 8 out of Walla Walla and No. 3 out of Columbia County, all responded to the fire. Farmers Glen Smith, Ed Stonecipher and Jesse McCaw showed up with discs to make fire lines and McGregor's sent a water truck.

Open Houses for the Touchet Valley Trail generated a lot of community engagement as representatives from Port of Columbia, the Walla Walla Valley Metropolitan Planning Organization, Community Council and more shared plans and ideas for the roughly seven-mile long trail proposed between Waitsburg and Dayton. Over 90 community members attended the Dayton Open house, with approximately 40 people attending the Waitsburg meeting. Attendees had the opportunity to ask questions and raise concerns in five different subject areas.

In October, students from Washington State University's Landscape Architecture program, architects from the Washington Chapter of the American Society of Landscape and community members gathered for a weekend-long design charrette for the proposed trail. The design event concluded with a presentation and dinner at the Columbia County Fairgrounds Pavilion.

The November election was a fairly low-key affair, with a few school board positions being contested and a levy vote for the Parks and Recreation District initially on the winning side. Pam Chapman defeated Randy Hinchliffe for Position #5 on the Waitsburg School Board, and Wayne Chabre defeated incumbent Karen Tonne for the Prescott School Board District #3 seat. After the final vote tally, the Parks & Rec levy ultimately failed in Waitsburg.

Local man Daryl Hopson made a big splash on the cover of the Times in November, when reporter Beka Compton covered his once-in-a-lifetime trip to London to appear in the Lord Mayor's Parade.

The Dayton-Waitsburg boys basketball team gained their first victory in three years with a non-league victory over Prescott in December.

The results of a series of community surveys about the fate of the Dayton-Waitsburg athletic combine were released in December, surprising committee members with the resoundingly positive opinions about the shared athletic endeavors. Ultimately, both the Dayton School Board, and the Waitsburg School Board opted to continue with the sports combine at their December meetings.

The Waitsburg Hometown Christmas festival honored Walla Walla County Sheriff John King, who passed away in September, by naming the annual parade in his honor.

Changes are afoot at Waitsburg City Hall with the news that Deputy Clerk Kelly Steinhoff is leaving her position to begin work at Columbia County in January. Her position has been posted in the Times and elsewhere. The Times wishes Ms. Steinhoff all the best in her new endeavors and thanks her for her years of dedicated service.