Lessons provided in why and how to revitalize a community 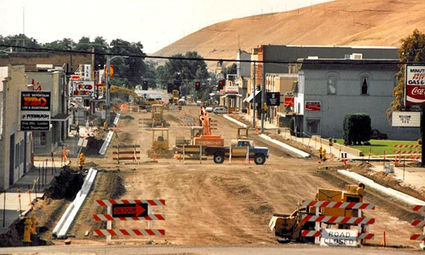 DAYTON-"The importance of historic preservation cannot be overstated," said Marcene Hendrickson when she spoke at the Dayton Chamber Awards Banquet, on Nov. 7.

"It is not just about a way to save old stuff," she said. "It is a way to recycle sound building material, preserve the town's character and its neighborhood and provide a link between our past, and present, for future generations, as well as to promote tourism."

Hendrickson painted a sad picture of Dayton in the early 1980s.

She said there were empty buildings, in need of repair, all up and down Main Street. Farms had gotten bigger. Machinery had replaced farm labor, which had an impact on the financial bottom line for downtown businesses. And businesses began to close after the community's largest employer Seneca Foods, Inc. drastically decreased its workforce.

She said the community realized something needed to be done, so the Dayton Chamber of Commerce called a town meeting, which was attended by about 300 people.

"There was much discussion regarding our main goals. Was it economic development, historic preservation, beauty, or just a nicer place to live?" said Hendrickson.

The community elected not to be a theme town, like Leavenworth, but to promote Dayton's historicity.

The community wanted to improve the infrastructure on Main Street, restore the historic courthouse, and develop festivals and events, to promote tourism.

Hendrickson said, "We began with small projects so we could develop broad-based enthusiasm among the citizens."

The first project was to create a park on the site of the old flour mill, west of Banner Bank, which was then Frontier Federal Bank, and the owners gave permission for it to be cleaned up and landscaped.

"One Saturday, volunteers arrived early with shovels and trucks, and by nightfall we had a park," Hendrickson said proudly.

But, she said, the feeling of accomplishment was tainted by questions about who would pay the water bill, and who would mow the grass. Eventually the bank ended up buying the park for their driveway expansion, she said.

So, they learned a big lesson right away.

The first step was the formation of a 501 3(C )nonprofit called the Dayton Development Task Force.

The second step was to gain local support and commitment.

She said a Local Improvement District (LID) was formed, and the building owners taxed themselves 42 dollars for each linear feet. of building space. That money was then used for matching grants.

A city planner was hired to help with the scale of the project, and the development of a formal plan helped to secure state and federal grants, she said.

She said Main Street was closed for almost four months during construction. New water and sewer lines were placed, storm drains were buried, and the street was paved with concrete.

Then tree-lined sidewalks, street lights and street furniture were placed along Main Street.

"We were true to our historic look and rejected brick pavers and sidewalk bump-ups," she said. "The concrete sidewalks were tinted to look like old concrete, and not bright, and new."

She said business on Main Street took a downturn during construction, but when the work was over sales were better than before.

Hendrickson said interest in creating a historic inventory of Dayton's unique homes was spurred by the 1970s restoration of the Dayton Historic Depot.

Hendrickson said the 1887 Historic Courthouse has also been restored to its original splendor.

It had been drastically altered, she said.

"To our knowledge it is the only courthouse in the state that has been rehabilitated using a partnership of both private and public dollars." Hendrickson said. "Today this working courthouse is an attraction to many visitors, and photographers."

Because of improvements to the downtown streetscape, building owners could also see the benefit of restoring and repairing neglected buildings on Main Street.

She said in 1993 citizens decided to have the burned out building, located between the Weinhard Hotel and Village Shoppes, cleared out, to make room for a parking lot.

In 1996, the community elected to restore the long abandoned and dilapidated movie theater building.

"Closed since 1965, the roof had leaked for ten years. The floor was rotten and the smell was not pleasant," she said.

Funds were raised, a committee chairman identified, and a construction crew was at the ready.

The Liberty Theater opened in the fall of 2001 with their first musical production of "The Music Man", she said.

A few years later the building next to the theater was purchased for use as an annex.

It was because of the generosity of many foundations and trusts that the rehabilitation of the Liberty Theater could be done. Over $850,000 was contributed, she said.

In 2005, a pathway was created from the historic courthouse to the Smith Hollow Country Schoolhouse, passing by the Dayton Historic Depot and sculptures of the Depot Stationmaster and Sacajawea. Wayfinding signs have been installed, and the playground at Caboose Park was finished and dedicated in 2019.

Now this "String of Pearls" belongs to the public.

"Our work continues," Hendrickson said. "Our partnerships have been strong."

Hendrickson said is important to know that these significant changes came about because ordinary citizens took a chance and committed to trying something new.