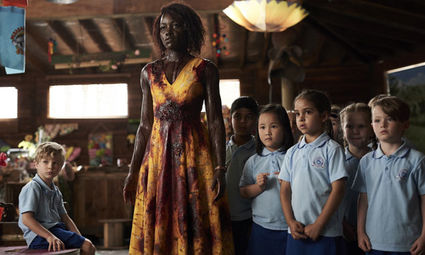 Little Monsters (2019), directed by Abe Forsythe. A washed-up musician teams up with a teacher and a kids' show personality to protect young children from a sudden outbreak of zombies.

Welcome to Spooktober. Are you ready for the ghosts, goblins, and ghouls to run amok all over town? The right lineup of movies can make or break Halloween.

There are no shortage of haunted films and freaky flicks to choose from. The Hulu Original film, Little Monsters is a highly recommended instant classic to add to the repertoire.

The horror comedy, directed by Australian writer, actor and director Abe Forsythe is the heartwarming tale of a young Darth Vader defeating zombies.

Though the movie is Rated R for bloody zombie violence, crude sexual content, language and brief drug use, it is one the whole family can enjoy.

Not to be confused with the 1989 movie currently streaming on Netflix of the same name, this movie is neither a remake, nor a reboot. There's no relation.

That Little Monsters featured 1980s sensation, Fred Savage, and a blue demon sneaking into a glittering underground connected by the spaces under childrens' beds to play pranks on unsuspecting kids. Also fun.

In the contemporary movie, Alexander England starrs as Dave, a failed rockstar legend-in-his-own-mind who argues mercilessly with his baby crazy girlfriend, Sara, played by Nadia Townsend.

The couple breaks up and Dave seeks refuge with his sister, Tess, played by Kat Stewart, a single mom.

Tess' son, Felix, played by Diesel La Torraca, is an only child, and is overjoyed to have his uncle Dave come stay on the couch. Dave wastes no time exposing the impressionable five year old to an advanced video game system with a 3D display, where he learns to shoot zombies, much to Tess' dismay.

Despite having broken up with her, Dave gets the idea to propose to Sara with the help of his young nephew dressed as Darth Vader. Instead of the touching moment Dave envisioned, sending Darth Felix in first, he finds his ex in the throes of passion with Rory from work. The following altercation is hilarious in the most embarrassing of ways.

Dropping Felix off at school, Dave meets his teacher, Miss Caroline, played by Lupita Nyong'o. Miss Caroline holds the attention of her students by playing ukulele and singing. Dave is instantly captivated and attempts to woo her by mentioning his band. And even brings his guitar for show and tell at after school pick up.

Expert acting is to be expected from a seasoned actress like Nyong'o who has starred in such box office hits as Avengers and Star Wars movies, but the performance of Diesel La Torraca as Felix is outstanding.

At a young age, he demonstrates a full range of emotions; from sweet boy, to accurately simulating the experience of anaphylaxis.

Teddy had been traveling across the country in the McGiggle Mobile with his puppet sidekick, Frogsy.

Teddy is also instantly enamored with Miss Caroline. "Let the beautiful, yellow lady come through," he insists and Frogsy shouts that he wants to give Miss Caroline a cuddle.

Teddy McGiggles sings songs as they visit the exotic animals in the petting zoo.

On their way to the farm, the kids' bus passed a conspicuously placed U.S. Army testing facility. Somehow, one of the subjects attacks a doctor and gets loose. When soldiers call to report the breach and casualty, they find a larger scale incident in progress.

The outbreak is immediate, but the zombies are the slow kind that aren't so much focused on brains, as any and all flesh. They tear through sheep and other animals on the farm.

Meanwhile, Dave's hopes for a chance with Miss Caroline are dashed when he spots her engagement ring and she reveals that there is a fiance, Ian, in the picture.

This puts a damper on the rest of the Dave's day, to say the least. 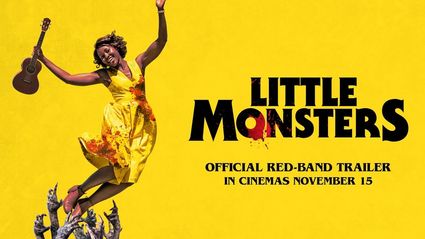 The kids' tractor tour comes to a halt when the tour guide naively confronts a figure eating sheep and is killed in the distance as Miss Caroline explains the importance of proper language to Dave. Surprised but not undone, Miss Caroline pins a zombie to a tree with a rake while Felix quickly teaches Dave how to drive a tractor.

Anxiety reaches an alltime high as they drive through the farm until their way is blocked. Now on foot, Miss Caroline makes up a conga-tag game. They sing Old MacDonald while zombies amble toward them. Their goal of reaching the bus to get home doesn't pan out as the bus is filled with them, too.

At the base's perimeter, the military plans to contain the zombie problem by blowing it up, with the explosives set to target the souvenir shop.

Can this unlikely trio get the kids to safety before the bomb goes off? Stream it and see.

Fair warning: this movie contains the singing of Taylor Swift's Shake it Off, not once, but three times.