Dayton Cut and Wrap IS under new management 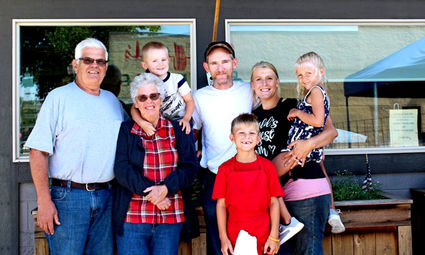 Dayton Cut and Wrap owners Joe and Susan Nyce, on the left, are pictured with Derek Katsel and Savana Cole and three of their six children; (l to r) Clayton, Riley, and Rowdy, in front. Rowdy is ready to lend a hand in the shop.

DAYTON-Dayton Cut and Wrap has a new name and is under new management.

Derek Katsel and his wife, Savana Cole, have received their custom meat facility and custom farm slaughter license through the state Dept. of Agriculture, along with their business license, and are now open under the name Katsel's Cut and Wrap.

Derek Katsel said his interest in the meat business began when he worked for Jim and Connie Westergreen, as their main meat cutter.

The Westergreens operated Dayton Cut and Wrap, under the moniker Tucannon Meats, in the early 2000s, until Scott Groom took over management, in 2017...