Blue Mountain Heritage Society continues to honor the past 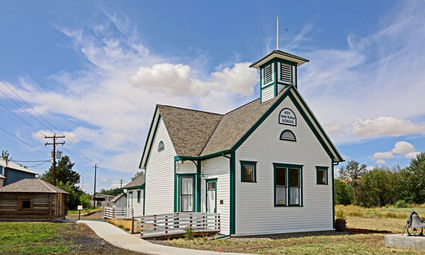 The 1900 Smith Hollow Country School was moved from its home in Smith Hollow to its current location on Front Street where it serves as a museum. During it's time the Smith Hollow School, which served grades one through eight, was considered one of the best-built and best-equipped schools in the county. According to the Blue Mountain Heritage Society website, students ranged in age from 6 to 20 years old. Teacher pay, at $90 to $114 a month, was among the highest in the county.

DAYTON-"It's really amazing how much has been done with just volunteers. We have a really committed group of people working together to preserve our local history," said Blue Mountain Heritage Society (BMHS) President Paula Moiso.

Since the BMHS was officially formed in 2004, the all-volunteer group has been hard at work educating the public about the rich and diverse history and resources of southeastern Washington through three heritage museums including the Palus Museum, the Smith Hollow Country Schoolhouse and the Dodge Quarantine Cabin, along with the Sacajawea Statue.