Learn more about Columbia-Walla Walla Fire District No. 2 by visiting the District website at www.wfd2.org. Volunteer applications are available for download on the website as well. 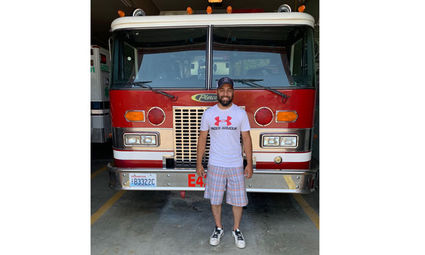 Waitsburg volunteer firefighter Miguel Castillo has been with the District approximately five years. The family-man says that being a volunteer is the right thing to do, especially in a small community.

Over the past few weeks, The Times has profiled some current department volunteers to learn about their experience and how they work volunteering around their other responsibilities.

This week, we check in with Miguel Castillo who grew up in Touchet and moved to Waitsburg six or seven years ago. Miguel, 32, is a family man with a wife and three children, ages 2, 8, and 10. Miguel began serving as a Fire No. 2 volunteer about five years ago.

"I decided to start volunteering when I would watch big fires come through the area and not be able to do anything. I wanted to be more involved with the community – especially in such a small community," he said.

Miguel took the EMT course offered through Walla Walla Community College but hasn't taken the actual certification test yet. The department pays tuition for the ten-week course with a two-year commitment from the volunteer. Miguel said classes were three hours a night, Mon.-Fri. in the evenings, for 10 weeks.

"It's tough, but it's definitely worth it. You learn a lot more than you ever would have, things you would have never thought about, compared to just going through basic fire training," he said.

In addition to training locally, Miguel has been able to participate in wildland training, offered through Fire No. 3 in Dayton.

Miguel works full time for Chris Johnson Plumbing in Walla Walla but says his employer is understanding if he responds to a morning fire and has to come in late.

For Miguel, being part of the community and helping out is the best part of serving.

"Being a small community, you have to be involved. You can't just sit around and say, 'Hey, I'll let someone else take care of it,'" he said.

Miguel said that lack of community involvement is also the biggest challenge.

"At times, it's not having enough people to create crews. Sometimes we're shorthanded and get two people on fires. Sometimes we get ten people. It's great when we have a lot of people but it's difficult when we don't have a crew to supply. Not just for our county, but to help out Dayton, too," he said.

Miguel said he prefers being "on the back of the truck fighting fire" rather than driving. "I do get a rush out of it," he said.

Miguel highly encourages anyone interested in volunteering to take the step and do it, saying he is happy to help in any way he can.

"It's definitely a big commitment, but it's worth it. You become, not just a participating member of the community, but you are seen differently because you are out there helping the community out and volunteering your time," he said.

"We just don't have the crew to do everything we need to do. Everyone has a full-time job, plus trying to do what we do here. There are some of us that are willing to help out new members and get them up to speed so that we know we have people to rely on to have our backs," he said.