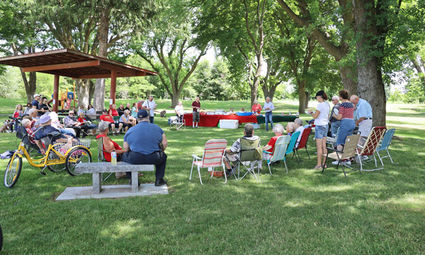 Community members gather in the park for food and fellowship.

WAITSBURG-Waitsburg's Patriot's Parade and community potluck is a nearly decade-old tradition, but many may not know how it originated. As the story goes, the whole thing began with a dare.

In 2011, Anita Baker challenged her late husband, Tom, and Jack McCaw to walk down Waitsburg's Main Street, bearing the colors, on the 4th of July. The only hitch was that she required them to wear shorts while doing so.

McCaw spoke for Tom, saying they would accept the challenge, for $100 each.

Anita agreed and the plan was formalized at the hardware store. John and Marilyn Stellwagen agreed to provide hotdogs following the "parade."

The original "parade committee" was surprised to see just how many locals turned out to see Tom and Jack in their shorts. People came out on scooters, carts and bikes to join the "parade," while bystanders lined the sidewalks. It was, after all, a proper parade.

John made a store run to add to the original two packs of hot dogs and people brought salads and side dishes. Bettie Chase brought six cases of much-appreciated cold water.

Oh, and about that bet! Anita paid up and Jack and Tom donated their winnings to Black Dog Rescue.

Many of the founders of the original Patriot's Parade are no longer with us, but the event, thankfully, lives on.