By Michele Smith
THE TIMES

A grant and donation will fund a new transit van 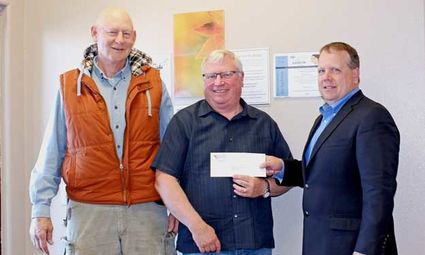 Columbia County Health System has received an award in the amount of four thousand dollars from Bill Clemens, Regional Business Manager for Pacific Power (center), to help with the purchase of a new Ford Transit van, to shuttle patients back and forth from their homes to medical appointments. CEO Shane McGuire (right) said both of the District's vans have exhausted their useful life, and that hospital officials hope to avoid paying for a van out of the operations budget. President of the Hospital Board of Commissioners Bob Hutchens (left) said the new van will be purchased through a company specializing in mobility transportation. The van will be up-fitted to accommodate two wheelchairs, or one gurney, for an estimated total cost of around $55,000.00.

DAYTON-In his report to the Hospital Board of Commissioners on April 23, CEO Shane McGuire talked about how a recent legislative ruling limiting nurses to eight hour shifts in a twenty-four-hour day, and providing for mandatory breaks and meal times, could impact patient care as well as the Hospital District's finances.

McGuire told the commissioners, "Nurses work 12 hour shifts by design. That's what they want. They want to work three days and have four days off."

He said nurses are saying shift change is the riskiest point in time for patients.

"Now a nurse will have to hand off (a patient) for the break or lunch, three times," McGuire said.

Moreover, McGuire said under the new rules, radiology and lab technicians, who currently cover shifts by working on call, will no longer be able to do so.

"They're saying you need to staff that. We may have to staff Lab and Radiology twenty-four hours a day, seven days a week," McGuire said.

"It's going to be incredibly expensive to staff those people, if we can find the resources," McGuire said.

"It got passed and we are going to have to deal with it, and it could be quite costly. It could jeopardize our ability to send nurses on ambulance runs," McGuire said.

"It's going to have a profound effect to the quality of care to our particular situation," he said.

McGuire said an amendment excluding rural critical access hospitals like Dayton General Hospital from the new rule was tossed out, and CCHS has only two years before they need to implement the new rules. McGuire said he is asking staff to join in on the discussion and begin strategizing going forward.

"That's just one of many things that have happened," said McGuire.

He said legislation also passed regarding lawsuits and who can sue. A person can be held liable in the case of accident or injury, even if only being "one percent" responsible.

"What it means is the deepest pockets are going to get sued," he said told the commissioners.

McGuire said the concern is that this legislation will drive lawsuits against health systems, which are considered to have "deep pockets."

CCHS has been awarded a grant in the amount of $23,750 from the Greater Columbia Accountable Community of Health (GCACH) funding to improve health under Lack of Access to Care, as identified by the Local Health Improvement Network.

"This is great news for the Health System as we work towards the purchase of a new van," said McGuire.

McGuire said both of the District's vans have exhausted their useful life, and that hospital officials hope to avoid paying for one out of the budget for operations.

The award from GCACH will be added to funds received on April 30, from Pacific Power, to go toward the purchase of a $55,000 Ford Transit van, to transport patients back and forth to medical appointments.

The van will accommodate two wheelchairs or one gurney, he said.

The grant application was reviewed by the Blue Mountain Community Foundation and a letter of award, outlining the terms of the grant and reporting requirements will be sent to the hospital district soon.

McGuire said he met with a local dentist about working in conjunction with the hospital district to provide dental care to Medicaid patients, as well as the underserved population.

"When we looked at the demographics, only fifty percent of the adults had a dentist visit and check up in the past year. That's way behind the state average," McGuire told the commissioners.

The commissioners have signed agreements with Providence St. Mary's Hospital for tele-hospitalist services at Dayton General Hospital (DGH). The next step is to assign them with hospital privileges, he said.

McGuire said CCHS is being paid for participating, as a control group, in a University of Washington study on primary care, and CCHS will receive the actual interventions when the study ends.

"It was well received," he said.

The health system is working with the county public health department to provide cold lunches to Starbuck school students, twice a week, and is paying for pool passes for about fifty summer recreation youth to swim at the Prescott Pool.

"In my opinion keeping those kids active throughout the summer is a worthwhile cause," McGuire said.

He said with help from Providence St. Mary's Hospital in Walla Walla, medical staff at DGH could benefit from the possible use of that hospital's software to store EKGs, which will be beneficial when comparisons are made.

Also, the Waitsburg School District is seeking a contract with CCHS for speech therapy services, he said.

In March, an all-time high number of patients was seen in the Eemergency department, which represents a general trend for patient volumes.

"Those efforts, while started ambiguously four years ago, are actually coming to fruition and helping the health system stay healthy," he said.

McGuire said an additional payment from the Washington Rural Health Access Preservation Program for behavioral health screening of patients is expected in the near future.

"We are ahead of the game because we started early on the integration models," he said.

In April, $1.73 million was deposited, and McGuire is expecting an additional deposit from April tax revenues.

Accounts Payables have been paid down in April and days of cash should see some improvement, as well, he said.

During the April meeting, the Hospital Board of Commissioners adopted a resolution amending their bylaws to reflect a new day and time for their regular meeting.

The next meeting regular meeting will take place at 6:00 p. m. on May 23 at the Waitsburg Town Hall.