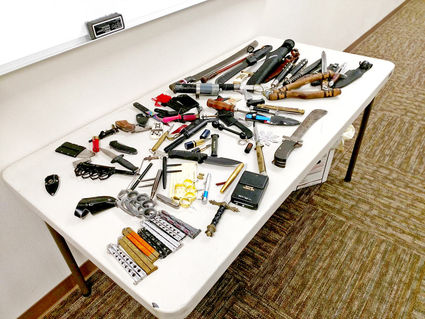 This table of weapons was displayed at the Feb. 15 Citizen's Academy program in Dayton. The topic of the evening was Officer Defensive Tactics and Use of Force. The table is filled with actual weapons that have been used to confront local officers in the performance of their duties. Thirty-two citizens are participating in the class that runs for 11 weeks from Feb. through April. Sheriff Joe Helm said the class has stirred interest in bringing back the Search & Rescue and Reserve Deputy programs.

DAYTON-Items on the agenda at last week's city council meeting included an update on the city's Wastewater Treatment Plan Project.

"We're getting closer in negotiations with some land owners," said Mayor Craig George.

He said there will be an executive session to discuss property acquisition for the proposed Wastewater Treatment Plant Project at the March 13 city council meeting.

George said a land swap is being conducted between the city and the county.

He said the city will swap land owned near the golf course sheds at the Touchet Valley Golf Course, in exchange for the land beneath the F...