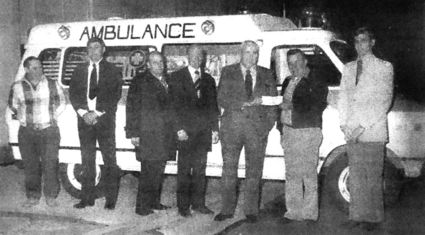 Waitsburg Ambulance Service board members posed proudly in front of the brand new ambulance they purchased in 1973. WAS took out a two-year loan to purchase the vehicle, but paid it off in only four months. Community donations, along with a final check of $1,500 from Green Giant eliminated the debt. On arrival, the ambulance was paraded proudly up and down Main Street.

WAITSBURG – Effective Feb. 1, Waitsburg will no longer provide ambulance service. The Waitsburg Ambulance Service (WAS) was established in 1970 but financial difficulties forced the service to disband in January of 2013 when they handed transport services over to Columbia-Walla Walla County Fire District 2 (CWWFD2).

From its inception, the service was a community effort. Roy Leid called the first meeting in 1970 to form the initial board which was made up of representatives of many organizations. The original board included Don Hinchliffe (Commercial Club), Jack Otterson (Lions Club), King Witt (City Council), Harold Bloor (Fire Department), Mae Weaver (Progressive Club), Roberta Broom (Denova Club), Dr. Roger Hevel and Joan Hays. Board Chair Jack Otterson, Secretary/Treasurer Joan Hays and Dr. Roger Hevel served on the board for the entire 45 years of the services' existence.

The service was founded on less than a shoestring budget with an initial treasury amount of $0.00. Waitsburg leased a 1958 Chevrolet station wagon from Columbia County Ambulance Service for $30 a month for two years.

In 1972, a subscription plan was adopted with dues of $10. Members, and anyone in their household, would receive free transport. By 2015, that fee was still only $35.

Waitsburg residents supported the service with donations and memorials and local organizations and businesses provided sizeable donations to keep it running. By 2013, about one-third of the service's operating costs were covered by EMS funds the service received by contracting with the fire department and the City.

Eventually, the WAS began to struggle with finances. The service was forced to take out a loan to cover operating costs for the first time ever in December of 2012. At that time, the service owned a building on Preston Avenue and two well-equipped ambulances and emergency equipment. The service was manned by three paid EMTs and approximately ten volunteers.

As financial difficulties continued, the WAS board agreed that attempting to continue operations as they had in the past was not feasible. In January of 2016, CWWFD2 assumed responsibility for providing ambulance service to the community of Waitsburg as well as outlying areas.

"The Waitsburg Ambulance Service asked us to take it over. We wanted to keep it in the community, even knowing what a tough animal it was. We knew it was going to be a challenge," said Fire District 2 Commissioner Deb Fortner.

"As a volunteer department in an area with a small tax base, there simply isn't the funding to provide this service on a consistent basis. While CWWFD2 receives funding from Columbia and Walla Walla Counties Emergency Medical Services (EMS) levies, it isn't enough to hire the appropriate staffing, purchase the needed supplies, and maintain the ambulance," said a press release from fire district No. 2 commissioners.

"How long before private insurance does the same? Sure, you can bill what it costs you, but you're never going to get it back," she said.

Fortner explained that challenges go beyond funding to a lack of volunteers. Volunteers are required to have the same schooling and practical experience as a professional EMT. That means attending EMT training, hospital experience, ride-along time and continuing education. That's difficult for someone with a job and family to pull off, she said.

Fortner said that, if anything, she expects that service will be improved.

Of the 133 transport calls District 2 received in 2018, they only made 21 runs. The City of Walla Walla or Columbia County took the other transports.

Now, rather than waiting to see if Waitsburg will have the manpower to cover a transport run, Columbia County will automatically take the call.

"I think this will be a better service model for right now because once those tones hit, Dayton knows 'we're going'!" Fortner said.

"We're still providing service, we're just contracting with Fire District 3 for transport. We're funneling our EMS levy dollars to Fire District 3 to help get them stronger so they can get more people on," she said. "We'll be sending one ambulance to Dayton, though we don't know if it will be sold or borrowed. We'll work out something that benefits everyone."

Commissioners are hopeful that District 2 can eventually build a strong enough volunteer pool to resume transport service in the future.

The district will still cover the cost of training for volunteers who commit to serving two years with the district, either as EMTs or firefighters. Fortner said it is a long process for a volunteer to find a class, and then complete training, testing, certification and ride-time requirements.

"It can be two years before a new EMT can be comfortably sent out on their own," she said.

Fortner said the District currently has 17 active volunteers and four EMTs. Three of those volunteers are looking at taking the Walla Walla Community College EMT course to be offered this spring.

A District "strategic planning meeting" is set for February to discuss management, the selection process for a permanent fire chief, and what to do with the Preston Avenue ambulance building, Fortner said.

"The take home from all of this is that people need to know that EMS levy dollars are still going for EMS in this District . . . We don't want to go broke in the process of trying to figure this all out. If we bankrupt the fire department, we've got nothing," Fortner said.

"Our neighbors are fabulous! Columbia County Fire, City of Walla Walla, District 4 of Walla Walla are always willing to help us. There's never been any us versus them. It's always been about what we can do to make each other whole and help each other. We're very appreciative of our neighbors," she added.

Anyone interested in applying in any volunteer capacity can fill out the application form linked on the District 2 website at wfd2.org.