City is lauded in special issue on art and the community 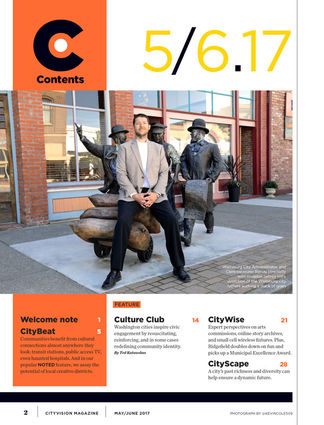 Waitsburg was featured in the most recent issue of the Association of Washington Cities Cityvision magazine. The May/June edition focused on how public art can positively impact a community. In Ted Katauskus' Culture Club article, Waitsburg is used as an example of how public art can inspire civic engagement and reinvigorate, reinforce, and sometimes even redefine a community. Here: City Manager Randy Hinchliffe sits with Waitsburg's Founding Fathers on the magazine's table of contents page.

WAITSBURG – There's rarely a day goes by that at least one passerby doesn't stop in front of The Times to have a photo taken with Jeffrey Hill's Founding Fathers sculpture. Now, that sculpture, along with Wayne Chabre's interactive Fanny Weller bronze and Squire Broel's The Waitsburg Monument obelisk, are receiving statewide recognition as subjects of a feature story in the May/June 2017 Cityvision Magazine.

The Association for Washington Cities, publisher of Cityvision Magazine, got the head's up about Waitsburg's art project when City Manager Randy Hinchliffe entered the city for a Muni...