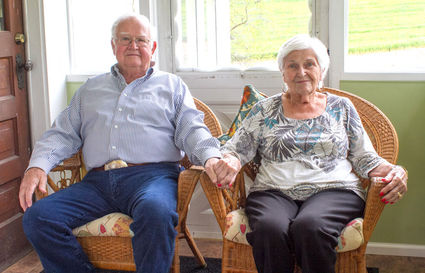 Howard and Dona Jean Smith have been selected as parade marshals for the 2017 Waitsburg Celebration Days parade. The couple say they are honored to be chosen and are looking forward to leading the parade in a convertible owned by their good friend, Bob Collins. The Smith family has been farming in Waitsburg since 1919. Left: Howard and Dona Jean relax on the sun porch of the family farmhouse, built in 1911. The Smith family was the first family to occupy the home.

The Smith family has farmed in Waitsburg since 1919

WAITSBURG – Because she has never driven a truck, and has sat in the saddle only one time (and immediately wanted off!) Dona Jean Smith said she was "flabbergasted but very honored" to be chosen parade marshal for the 2017 Waitsburg Celebration Days Parade. Husband and co-marshal, Howard, a third-generation Waitsburg wheat farmer, heartily agrees with the honor of being selected.

Howard's great grandparents migrated from Missouri to settle in Milton-Freewater. In 1919 his grandfather, also named Howard Preston Smith, and his wife, Lillia...