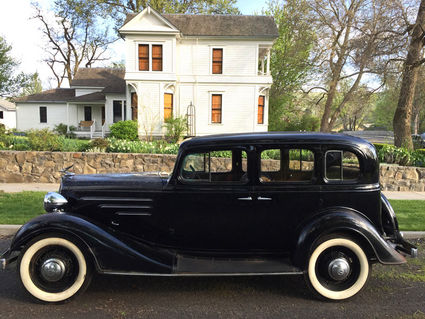 The Boldman family's 1934 is back at rest at its old home in front of the Boldman House Museum.

DAYTON – The Boldman family's 1934 Chevrolet Master Deluxe, a six-cyclinder, four-door sedan, has returned to Dayton, and has been reunited with its original license plates, car inspection report, and registration paperwork. The car and some of its original items were separated when Gladys Boldman sold the car in 1977.

The car was originally purchased on March 28, 1934, by S.A. Boldman, and was driven by him and members of his family, according to Sylvia Beuhler, the Boldman House Museum Director.

When Gladys Boldman stopped driving in her later years, the car sat in the carriage house and was only driven when it was time to be serviced, Beuhler said.

"Only Cliff was allowed to drive it back to the house," said Duane Dunlap in his notes about the car. Dunlap serves on the Boldman House Museum Steering Committee.

The car was eventually sold, for either $2,500, or $4,020, according to differing versions of the sale, to Richard Greatorex, a car collector in Longview, Wash.

Beginning in 2000, members of the Boldman House Steering Committee began to try and acquire the car, but were unsuccessful.

Beuhler said she recently wrote to Greatorex's daughter Nancy De Camp, and heard back from her on March 1. De Camp told Beuhler the family was downsizing her father's estate, and she offered the Dayton Historical Depot Society the opportunity to buy the car.

On May 1, Boldman House Steering Committee members Sylvia Beuhler, Van Whysong and Larry Fairchild, went to Longview to see the car. "We made sure the numbers matched from the original title, motor number, and serial number," Beuhler said.

The car was a match according to the motor number, and a cashier's check in the amount of $12,000 was given to De Camp, she said. The 3,000 lb. vehicle was then loaded onto a trailer for the trip home the next day.

Whysong said the car drew lots of interest on the trip home. "We went in to eat lunch and we were so paranoid we took the hood ornament off and put it in the pickup cab," he said. 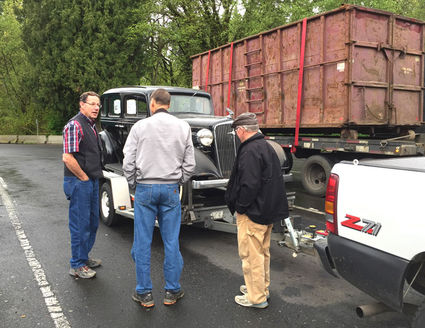 Volunteer Van Whysong gives an impromptu "tour" in a rest stop parking lot on I-5 while bringing the car back from Longview, Wash.

The car and its attendees pulled up at the Boldman House Museum at around 5 p.m. on May 2. The car was offloaded, and taken for a spin around the block, Whysong said.

Beuhler credited De Camp's husband Bill with getting the car in working order. "Nancy De Camp made the transaction so easy for us," said Beuhler. "The car didn't run, but her husband, Bill, worked on it, and got it running. So they put in a lot of work."

Of particular interest is a service record inside the car from the Cliff Huss Chevron Dealership at 134 East Main Street in Dayton, stating the car had 38,876 miles on it. Only 3,000 additional miles have been put on the car since, Beuhler said.

The car is in original, unrestored condition, with black exterior and tan mohair upholstery, and has white sidewall tires. Look for it in the Dayton Days Parade on May 27, if a driver can be found, said Beuhler.